Author and journalist, Jeremy Scahill, talks about the private contractor mercenary company, Blackwater, on the Portland stop of his book tour for the launch of the paperback edition of his book, BLACKWATER: THE RISE OF THE WORLD’S MOST POWERFUL MERCENARY ARMY.

AS A MAN THINKETH

Author of „From Passion to Peace“

Mind is the Master power that moulds and makes,
And Man is Mind, and evermore he takes
The tool of Thought, and, shaping what he wills,
Brings forth a thousand joys, a thousand ills:—
He thinks in secret, and it comes to pass:
Environment is but his looking-glass.

FOREWORD. THIS little volume (the result of meditation and experience) is not intended as an exhaustive treatise on the much-written-upon subject of the power of thought. It is suggestive rather than explanatory, its object being to stimulate men and women to the discovery and perception of the truth that—

by virtue of the thoughts, which they choose and encourage; that mind is the master-weaver, both of the inner garment of character and the outer garment of circumstance, and that, as they may have hitherto woven in ignorance and pain they may now weave in enlightenment and happiness.

AS A MAN THINKETH

THE aphorism, „As a man thinketh in his heart so is he,“ not only embraces the whole of a man’s being, but is so comprehensive as to reach out to every condition and circumstance of his life. A man is literally what he thinks, his character being the complete sum of all his thoughts.

As the plant springs from, and could not be without, the seed, so every act of a man springs from the hidden seeds of thought, and could not have appeared without them. This applies equally to those acts called „spontaneous“ and „unpremeditated“ as to those, which are deliberately executed.

Act is the blossom of thought, and joy and suffering are its fruits; thus does a man garner in the sweet and bitter fruitage of his own husbandry.

„Thought in the mind hath made us, What we are
By thought was wrought and built. If a man’s mind
Hath evil thoughts, pain comes on him as comes
The wheel the ox behind….

..If one endure
In purity of thought, joy follows him
As his own shadow—sure.“

Man is a growth by law, and not a creation by artifice, and cause and effect is as absolute and undeviating in the hidden realm of thought as in the world of visible and material things. A noble and Godlike character is not a thing of favour or chance, but is the natural result of continued effort in right thinking, the effect of long-cherished association with Godlike thoughts. An ignoble and bestial character, by the same process, is the result of the continued harbouring of grovelling thoughts.

Man is made or unmade by himself; in the armoury of thought he forges the weapons by which he destroys himself; he also fashions the tools with which he builds for himself heavenly mansions of joy and strength and peace. By the right choice and true application of thought, man ascends to the Divine Perfection; by the abuse and wrong application of thought, he descends below the level of the beast. Between these two extremes are all the grades of character, and man is their maker and master.

Of all the beautiful truths pertaining to the soul which have been restored and brought to light in this age, none is more gladdening or fruitful of divine promise and confidence than this—that man is the master of thought, the moulder of character, and the maker and shaper of condition, environment, and destiny.

As a being of Power, Intelligence, and Love, and the lord of his own thoughts, man holds the key to every situation, and contains within himself that transforming and regenerative agency by which he may make himself what he wills.

Man is always the master, even in his weaker and most abandoned state; but in his weakness and degradation he is the foolish master who misgoverns his „household.“ When he begins to reflect upon his condition, and to search diligently for the Law upon which his being is established, he then becomes the wise master, directing his energies with intelligence, and fashioning his thoughts to fruitful issues. Such is the conscious master, and man can only thus become by discovering within himself the laws of thought; which discovery is totally a matter of application, self analysis, and experience.

Only by much searching and mining, are gold and diamonds obtained, and man can find every truth connected with his being, if he will dig deep into the mine of his soul; and that he is the maker of his character, the moulder of his life, and the builder of his destiny, he may unerringly prove, if he will watch, control, and alter his thoughts, tracing their effects upon himself, upon others, and upon his life and circumstances, linking cause and effect by patient practice and investigation, and utilizing his every experience, even to the most trivial, everyday occurrence, as a means of obtaining that knowledge of himself which is Understanding, Wisdom, Power. In this direction, as in no other, is the law absolute that „He that seeketh findeth; and to him that knocketh it shall be opened;“ for only by patience, practice, and ceaseless importunity can a man enter the Door of the Temple of Knowledge.

The Brazilian author PAULO COELHO was born in 1947 in the city of Rio de Janeiro. Before dedicating his life completely to literature, he worked as theatre director and actor, lyricist and journalist. In 1986, PAULO COELHO did the pilgrimage to Saint James of Compostella, an experience later to be documented in his book The Pilgrimage. In the following year, COELHO published The Alchemist. Slow initial sales convinced his first publisher to drop the novel, but it went on to become one of the best selling Brazilian books of all time. Other titles include Brida (1990), The Valkyries (1992), By the river Piedra I sat Down and Wept (1994), the collection of his best columns published in the Brazilian newspaper Folha de São Paulo entitle Maktub (1994), the compilation of texts Phrases (1995), The Fifth Mountain (1996), Manual of a Warrior of Light (1997), Veronika decides to die (1998), The Devil and Miss Prym (2000), the compilation of traditional tales in Stories for parents, children and grandchildren (2001), Eleven Minutes (2003), The Zahir (2005), The Witch of Portobello (2006) and Winner Stands Alone (2009). Paulo Coelho is also a pioneer and has expanded his presence in the internet with his daily blogs in WordPress, Myspace & Facebook. He is equally present in media sharing sites such as Youtube and Flickr, offering on a regular basis not only texts but also videos and pictures to his readers. From this intensive interest and use of the Internet sprang his bold new project: The Experimental Witch where he invites his readers to adapt to the screen his book The Witch of Portobello. Indeed Paulo Coelho is a firm believer of Internet as a new media and is the first Best-selling author to actively support online free distribution of his work.

Thank you Ana I. 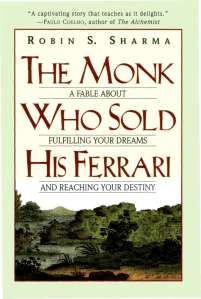 Everyone loves a good fable, and this is certainly one. The protagonist is Julian Mantle, a high-profile attorney with a whacked-out schedule and a shameful set of spiritual priorities. Of course it takes a crisis (heart attack) to give Mantle pause. And pause he does–suddenly selling all his beloved possessions to trek India in pursuit of a meaningful existence. The Himalayan gurus along the way give simple advice, such as, „What lies behind you and what lies before you is nothing compared to what lies within you.“ Yet it is easy to forgive the story’s simplicity because each kernel of wisdom is framed to address the persistent angst of Western white-collar professionals. —Gail Hudson

„A captivating story that teaches as it delights.“–Paulo Coelho, author of „The Alchemist“

„Nothing less than sensational. This book will bless your life.“–Mark Victor Hansen, coauthor of „Chicken Soup for the Soul“

„Robin Sharma has created an enchanting tale that incorporates the classic tools of transformation into a simple philosophy of living. A delightful book that will change your life.“–Elaine St. James, author of „Simplify Your Life „and „Inner Spirituality“ 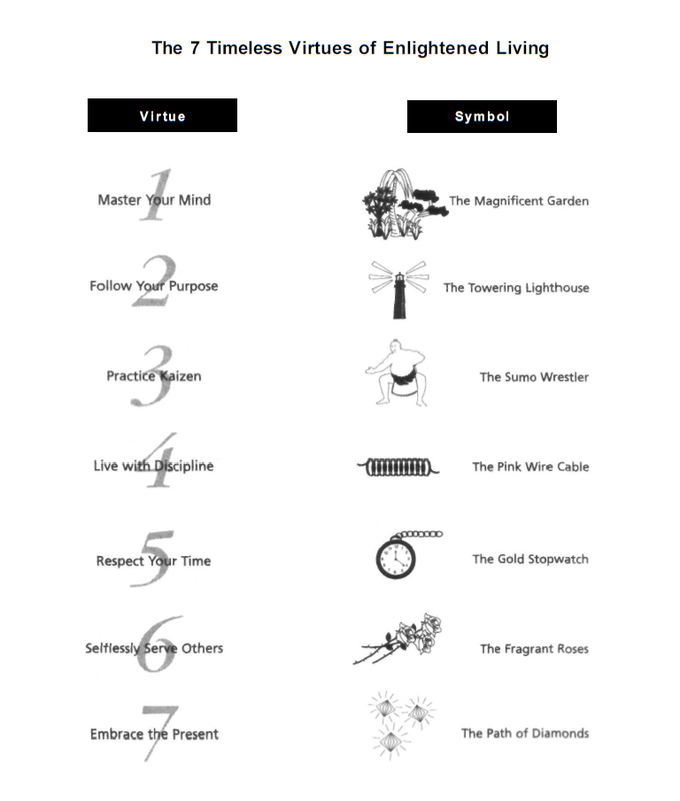 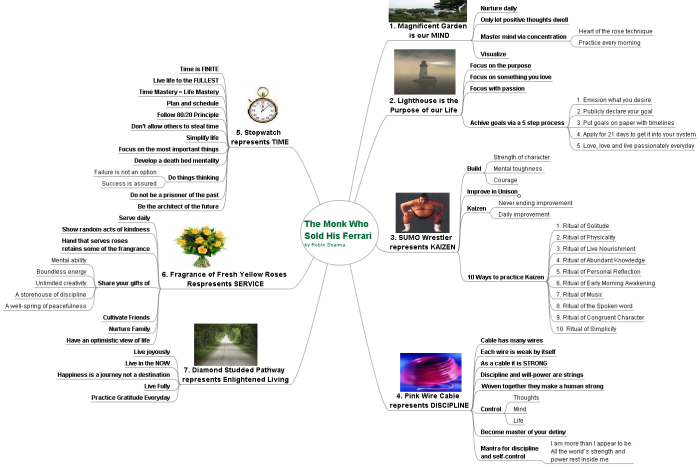 Ähnliche Artikel:
– Review of The Monk … including Mindmap Summary 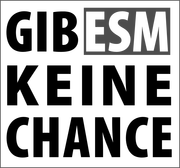